Bengals Fan gets reward, Saints fan gets ball and bag

Posted on November 18, 2014 by bittersportspills 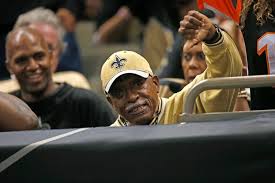 Did you see this? In Sunday’s Bengals domination over the Saints, when Jermaine Gresham scores on a 1-yard pass, he goes over to the stands and tosses the ball to a Bengals fan. Instead, Saints fan Tony Williams grabs the ball and ignores hot girl’s pleas for the ball:

Well, now we have it. Tony Williams looks like a total bag; in fact Jim Rome and a host of other sports personalities stated just that. In fact, Rome said Williams should wear a bag. Bag Williams, who was the “King of Zulu” for Mardi Gras 2002, stated he wanted to get the ball for his grandson:

The ball Tony Williams caught from Jermaine Gresham now belongs to his 8-y/o grandson, who was in the next section. He wanted it for him

Now there’s a great friend, trying to cover for his buddy with a pathetic, lame, weak ass excuse. Total BS. He made that up to get the heat off. Um, why not give your prime seat up for your grandson if you love him so (not) so much? Douche.

It’s not every day when you find your act of selfishness excoriated in the national media. Everyone in the world knows that ball was intended for BengalsGirl, . Now Bag Williams’ 8-year old grandson is going to get called names for his grandpa acting like he deserved that ball. What a scroat. The guy ought to change his name from Tony to Douchebag, “Bag” for short. Perhaps he can ask Gresham to sign the ball. Well, maybe not:

“He should be ashamed of himself,” the 26-year-old told an Associated Press reporter.

There you go SaintsFan, thanks for giving the rest of the world the opportunity to forget about a certain storm, their performance afterward and now recognize the most publicly visible one of you to be a giant bag.  Many of you were anyway, but the rest of football fandom tolerated it. Welcome back to being the rest of us. Well done.

I love sports. I don't love the hype, homerism, ratings talk, self-important egomaniacs, bias or any of the other nonsense you get with the national media. Nor will you get the two clowns on sports talk radio who stage phony arguments. It doesn't make it entertaining. It makes it time to turn on your iPod and jam instead of listening to white noise generators. This is the sports blog for you, the ones who don't like everything Los Angeles or New York. Just because the sporting media is based there doesn't mean we have to like their teams. We do treat them fairly, though. That means if one of those cities has an average QB who plays particularly well...we'll note it. If they're garbage, we'll say so. Instead of crying "why, why, why" like a certain sports media homer did in his radio broadcast. This isn't my job...I have a real one. Nevertheless, I'll post here when I make an observation. Common sense in sports is nearly dead. Now we're attempting to bring it back.
View all posts by bittersportspills →
This entry was posted in Douchetastic, Football, Haterade, Loser, NFL and tagged Bengals, Cincinnati Bengals, Douchebaggery, football, Jermaine Gresham, New Orleans Saints, NFL, sports, the Saints, Tony Williams. Bookmark the permalink.