Glasses During a Football Play?

Posted on November 23, 2014 by bittersportspills 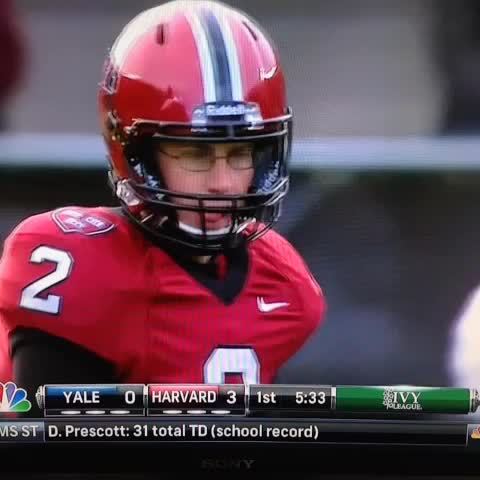 We’re understandably concerned about a football player wearing glasses during a play.

Until we find it’s a kicker. So it’s not even a real football player.

It doesn’t count.  Mostly because the likelihood of a kicker making physical conduct in an Ivy League football game is near-zero. And the fact that wearing glasses doesn’t matter in the Ivy League. Face it, after a Linear Algebra final (by the way, don’t take that class unless you absolutely must — it’s as big a challenge as senior-level statistics), kicking in a college football game is nothing important.

Something that would count is a Hall-of-Famer wearing glasses. Here we see Willie Roaf, then of the New Orleans Saints:

Photo from the Daily Hat Trick (click photo for link)

Fortunately, he didn’t wear the glasses during play.

I love sports. I don't love the hype, homerism, ratings talk, self-important egomaniacs, bias or any of the other nonsense you get with the national media. Nor will you get the two clowns on sports talk radio who stage phony arguments. It doesn't make it entertaining. It makes it time to turn on your iPod and jam instead of listening to white noise generators. This is the sports blog for you, the ones who don't like everything Los Angeles or New York. Just because the sporting media is based there doesn't mean we have to like their teams. We do treat them fairly, though. That means if one of those cities has an average QB who plays particularly well...we'll note it. If they're garbage, we'll say so. Instead of crying "why, why, why" like a certain sports media homer did in his radio broadcast. This isn't my job...I have a real one. Nevertheless, I'll post here when I make an observation. Common sense in sports is nearly dead. Now we're attempting to bring it back.
View all posts by bittersportspills →
This entry was posted in Douchery, Football, Haterade and tagged athletics, College football, football, glasses, Ivy League football, sports, Willie Roaf. Bookmark the permalink.