Posted on September 16, 2015 by bittersportspills

I’m cruising my way to Hawaii. 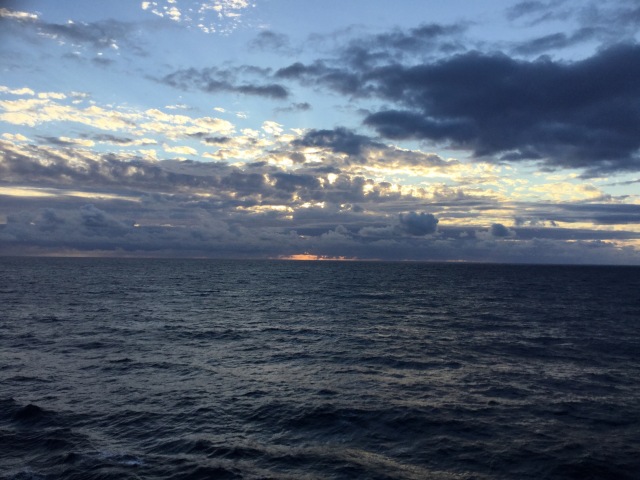 Unfortunately, the ocean is a little rough. It’s been interesting on board because people are tripping, running into stuff because the ship is moving underneath them. For those of us who are susceptible to motion sickness, we have two choices: break out the Dramamine, or put on some kind of wrist band.

My wife doesn’t get motion sickness, since she got used to it when traveling on her father’ boat. She asked me what the symptoms are like.

I said the first sign of it was cold sweat. It feels like a cold wind blowing. Then you want to reach for the bag.

I was deploying to an air base in the Middle East, in a jet called the C-5 Bus. That bus was scheduled to get two midair refuelings on the way. I knew this and took Dramamine before takeoff. Because Dramamine makes you drowsy, I fell asleep right away. The next thing I knew, we were refueling, and that jet was bouncing up and down. I knew something was going on, and then I saw people getting the sweats. Then one person, a tech controller I’ll call “Frank” turned pasty white. He was wiping sweat, then started grabbing for the bag. Another tech controller I’ll call “Bob” laughed at “Frank”, then he got sick all over himself. Once that happened, it became, as in “Stand By Me”, one big barf-a-Rama. The crew chief was spraying disinfectant to try and get that smell down but it just wouldn’t stop.

I love sports. I don't love the hype, homerism, ratings talk, self-important egomaniacs, bias or any of the other nonsense you get with the national media. Nor will you get the two clowns on sports talk radio who stage phony arguments. It doesn't make it entertaining. It makes it time to turn on your iPod and jam instead of listening to white noise generators. This is the sports blog for you, the ones who don't like everything Los Angeles or New York. Just because the sporting media is based there doesn't mean we have to like their teams. We do treat them fairly, though. That means if one of those cities has an average QB who plays particularly well...we'll note it. If they're garbage, we'll say so. Instead of crying "why, why, why" like a certain sports media homer did in his radio broadcast. This isn't my job...I have a real one. Nevertheless, I'll post here when I make an observation. Common sense in sports is nearly dead. Now we're attempting to bring it back.
View all posts by bittersportspills →
This entry was posted in Photography, Travel, Vacation and tagged cruising, motion sickness, travel. Bookmark the permalink.