Posted on October 24, 2015 by bittersportspills

I didn’t write about this last weekend, and I apologize. It’s pouring down rain here in San Antonio, so I have some time today.

Last weekend, my wife went to Minnesota, so I was home alone. I had gone to a funeral earlier Saturday, but I had empty space on my schedule (for once). I decided to drive up to Lockhart and try out some barbecue. Earlier this year, we had gone to Smitty’s while we were up there camping so I decided to try Kreuz Market. Aaron Franklin says the sausage there is good.

I ordered a hot ring, an original ring and a pound of brisket. They gave me some bread and I was good.  Sort of. I then ordered some mac and cheese. I decided I’d carry it all home and eat it there.

On the way home, I saw a line of people in front of Black’s Barbecue, so I decided to check it out and make it a true barbecue Saturday. After waiting about 40 minutes to get in the place, I was greeted with sides. I picked up some potato salad and beans. I then ordered their brisket (understand, brisket is mandatory here), and something called a “Giant Beef Rib.” Giant Beef Rib is a brisket equivalent on a bone. I also ordered some of their original sausage. 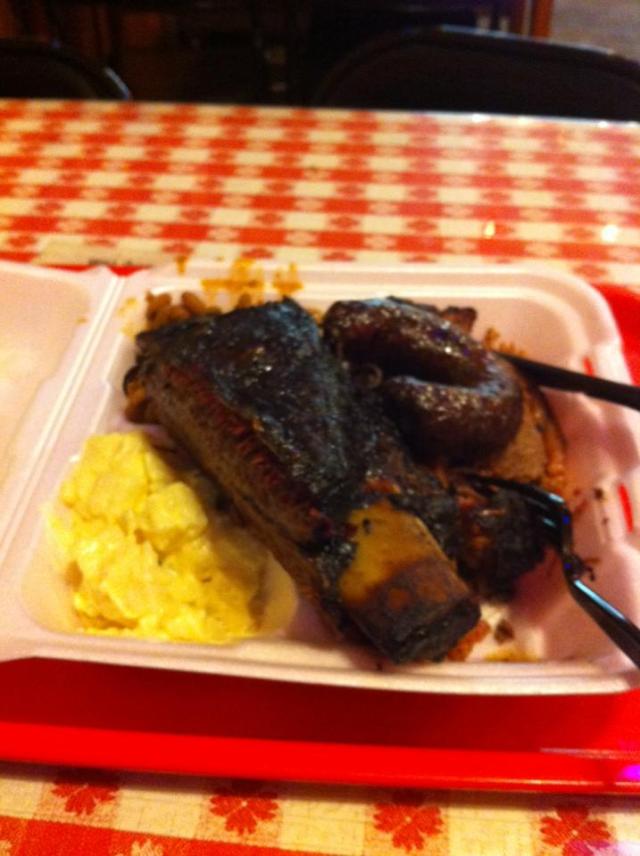 I then made a tactical error by sitting down for a short period and tasting the food. It turned into a long sit down. That Giant Beef Rib was fantastic; I had never had a beef rib that good, that soft. I hadn’t made beef ribs that soft ever. I might have to try making them again at some point.

I ate some of their delicious brisket, and then, I had the sausage.

It was a DREAM to eat that sausage. Seriously, it was the best sausage I had ever had to that point in my life. Beef ribs are one thing, because you don’t get them often. Sausage is totally different. Every barbecue place worth anything serves it. Sausage at most barbecue joints is ordinary. This sausage was greatness. The only reason I’m not saying it was the best sausage ever, is because it was not. Kreuz Market’s jalapeno and cheese sausage was even better. I don’t know what they do to sausage in Lockhart, but whatever it is, they can keep doing it. Most of the time when you eat sausage, the casing is just tough. Not at Black’s or Kreuz Market. I have yet to come up with an adequate description of the actual meat itself. It’s like full-bodied light meat, without the gristle you normally get in sausage.

The rest of the world’s sausage now sucks.

After I stopped myself from gorging on the barbecue, I went back and told the cashier “If I didn’t have to stand in line to get another beef rib, I’d get one to go.” Well, you don’t if you order to go! I did and carried one out. If I hadn’t, my wife wouldn’t have had any to try when she returned.

Lockhart is the capital of Texas barbecue as far as I’m concerned, and I have to give both Black’s (which is now in San Marcos as well) and Kreuz Market another try in what hopefully will be a long association. I didn’t mention I had gorged myself on the Kreuz Market sausage and brisket sandwiches later on that evening. I love thick sliced brisket, and that’s how Kreuz does it.

I highly recommend both restaurants, as well as Smitty’s.

I love sports. I don't love the hype, homerism, ratings talk, self-important egomaniacs, bias or any of the other nonsense you get with the national media. Nor will you get the two clowns on sports talk radio who stage phony arguments. It doesn't make it entertaining. It makes it time to turn on your iPod and jam instead of listening to white noise generators. This is the sports blog for you, the ones who don't like everything Los Angeles or New York. Just because the sporting media is based there doesn't mean we have to like their teams. We do treat them fairly, though. That means if one of those cities has an average QB who plays particularly well...we'll note it. If they're garbage, we'll say so. Instead of crying "why, why, why" like a certain sports media homer did in his radio broadcast. This isn't my job...I have a real one. Nevertheless, I'll post here when I make an observation. Common sense in sports is nearly dead. Now we're attempting to bring it back.
View all posts by bittersportspills →
This entry was posted in Barbecue, Food and tagged barbecue, Black's BBQ, brisket, Central Texas Barbecue, Giant Beef Rib, Kreuz Market, Lockhart, sausage, Texas barbecue. Bookmark the permalink.